Chehaoduo is an online trading platform for both new cars and personal used cars. Founded in 2015, it is now one of the largest auto trading platforms in China, valued at $9 billion in its series D round of funding last year.

In the early stages of Chehaoduo, to quickly adapt to our application development, we chose MySQL as our major database. However, as our business evolved, we were greatly troubled by the complication of MySQL sharding and schema changes. In face of this dilemma, we found an alternative database to MySQL: TiDB, an open-source, MySQL compatible database that scales out to hold massive data.

In this post, I'll share with you why we chose TiDB and how it empowers our application to provide better service for our customers.

MySQL is a stand-alone database that doesn't provide horizontal scalability. After our data volume exceeded a certain threshold, MySQL could no longer deliver satisfactory performance.

As our data accumulated, single instances often hit Queries per Second (QPS) limits and ran out of storage capacity. To squeeze data into single instances, we had to split large tables to smaller ones and split the change data capture (CDC) layer and data warehouse (DW) layer.

Depending on the data volume of the application, each split could take 2 to 4 weeks. This was a huge waste of time and energy.

MySQL sharding is intrusive to applications

As the user base grows, some tables might have tens of millions of data records, which slows down reads and writes. The usual approach is to shard the data, but this has some problems:

It's hard to change schemas for big tables

At Chehaoduo, our business model changes rapidly. To adapt to the business requirements, we have to frequently change table schemas.

When a table has millions of records, we need a third-party tool to execute data definition language (DDL) commands, such as pt-online-schema-change (pt-osc). During the schema change process, we must make a temporary copy of the table and then apply the changes. This is time-consuming and may impact storage, I/O, and the application.

Why we chose TiDB to replace MySQL

To address these pain points, we considered reforming and upgrading our existing database architecture. We analyzed the requirements from the application side and compared them to some common database solutions.

Analyzing our use scenarios

After we studied TiDB's advantages, we also analyzed Chehaoduo's specific use scenarios and summarized the application side's concerns:

Based on these requirements. we decided to migrate several applications to TiDB, including ticket distribution and transferring, the telephone sales system, the business central hub, and the accounting system. These applications have large amounts of accumulated data. Some of them must frequently add new fields, while others need transactions. TiDB can certainly help them out.

Facing a new database, the core application team couldn't help but feel concerned about its stability and reliability. To boost their confidence, we decided to pilot the system on some less critical services. The entire testing process had three stages.

The first stage was to use TiDB as a MySQL replica cluster and sync data using TiDB Data Migration (DM). The application side examined whether TiDB's data consistency, stability, and performance met their requirements. After that, we routed a small proportion of online requests to read from TiDB and observed the data. As everything went smoothly, we gradually increased the proportion until TiDB completely took over all read requests. The data validation didn't fail. By then, the application side had faith in TiDB and was ready to move on to the next stage. 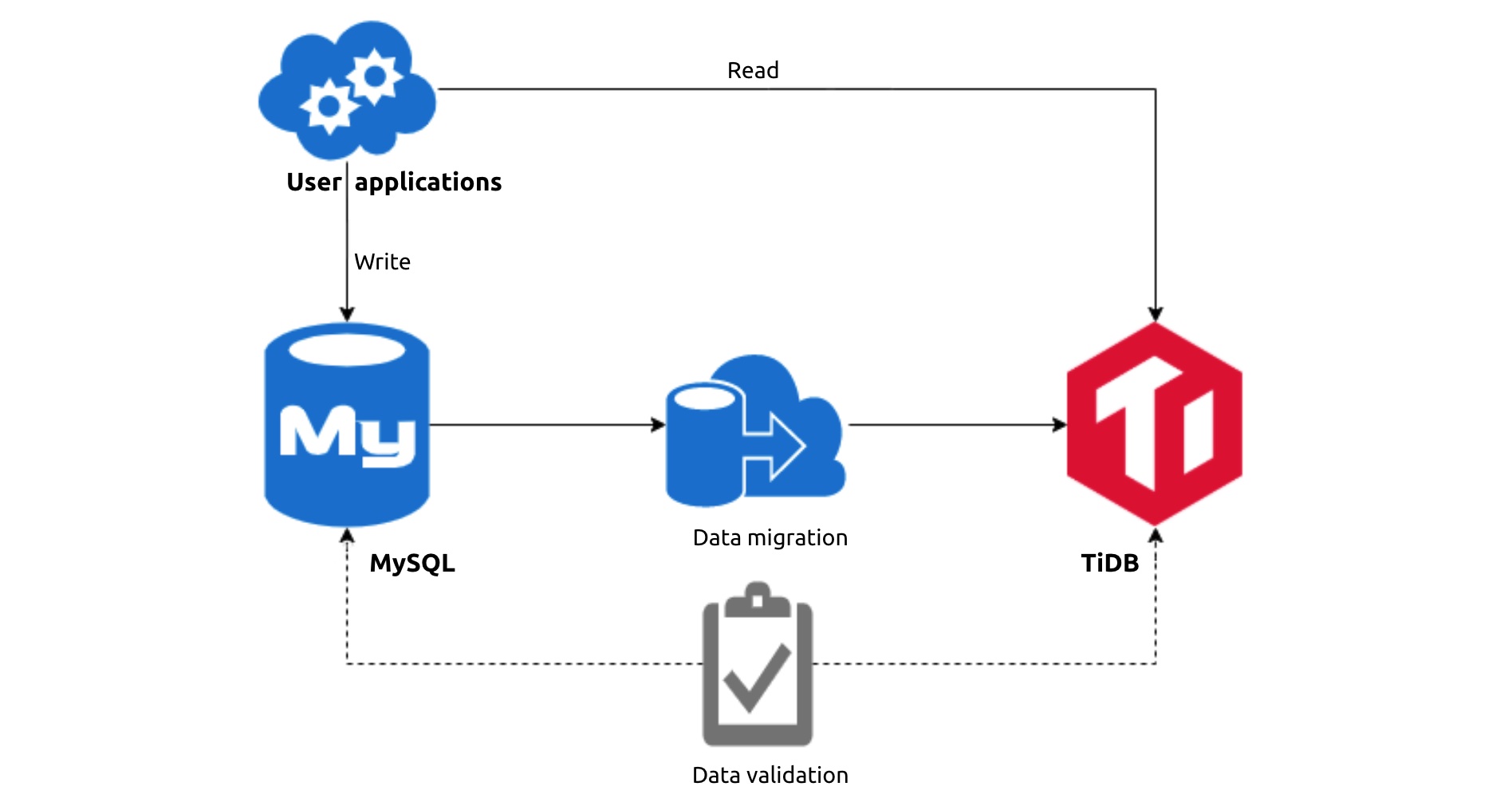 The first stage of migration: using TiDB as a replica cluster

In the second stage, the application wrote into MySQL and TiDB simultaneously without DM. It read from TiDB and wrote into TiDB directly. We still wrote data separately into MySQL to provide for contingencies. This stage lasted for two quarters, during which TiDB ran normally and passed our everyday data validation.

The second stage of migration: writing into MySQL and TiDB simultaneously

By the last stage, TiDB had earned our total trust. We put away MySQL and launched TiDB into our production environment as an independent database.

The last stage of migration: using TiDB as an independent database in production

With TiDB, our service quality has greatly improved:

While running TiDB in our production environment, we've encountered a few problems. Here, I'd like to share some lessons we learned.

For the production environment, we suggest choosing a release that has run normally for some time.

TiDB is an on-going technology. Bug fixes and new features are continuously added to new releases. Since our first research, TiDB has matured from version 2.0 to 4.0. When we upgraded from v2.1.x to 3.0.x, we didn't notice the SQL mode change, which resulted in an unexpected impact caused by the ONLY_FULL_GROUP_BY rule. Now, we only choose stable releases and usually don't upgrade our clusters unless we encounter critical bugs or need new features.

Because TiDB uses cost-based optimization, when the statistics change, the optimizer might select an incorrect index. One time, we saw full CPU utilization, rising I/O, and lots of queries timing out in our system. After we consulted PingCAP, the team behind TiDB, we resolved the issue via SQL binding.

As we gained more confidence in TiDB, we hoped to migrate more applications to it. However, due to limited hardware resources, we couldn't immediately get several independent TiDB clusters online. Therefore, our DBA team explored the possibility of deploying multiple clusters on the same set of physical servers.

To achieve hybrid deployment, we must isolate the resources from each other. TiDB has three key components: PD (the scheduler), TiKV (the storage), and TiDB (the computing layer).

After we verified that the abnormal SQL statements on one cluster didn't affect other clusters on the same physical machine, we connected our other applications, one by one, with TiDB.

Our future plans with TiDB

Our current infrastructure is deeply interconnected with TiDB, and we still want to achieve more with it.

Deploy on the Cloud

TiDB is a cloud-native distributed database. Our existing clusters are mostly deployed on-premises. Going forward, we plan to deploy TiDB on the cloud. With TiDB Operator, the Kubernetes operator for TiDB, TiDB will be able to automatically allocate resources and improve the resource utilization rate. This will greatly save on maintenance costs.

TiKV, TiDB's storage component, drew our attention. TiKV was originally created to complement TiDB, but we can also deploy it independent of TiDB as low-latency, persistable storage. We have already implemented this project, and plan to extend the use of TiKV to more applications.

Before we migrated to TiDB, we built our data flow service based on the MySQL binary log. Now that TiDB runs as our primary database, we use Pump and Drainer to replicate binlog.

TiDB 4.0 introduces a new feature, TiCDC, which is easier to deploy and supports output in multiple formats. We will gradually integrate TiCDC into our current system.

Integrate with an internal platform

At Chehaoduo, our DBA team develops and maintains an internal platform for MySQL management. Both DBAs and developers can perform daily routines on this platform. To unify the system, we will integrate TiDB into the platform and achieve automatic operations and maintenance.

Currently, our migration process has two major parts: migrate data using DM and then migrate the application. We hope to make the migration easier for the application side, for example, by introducing a SQL proxy to the architecture. The applications will only connect to the proxy layer and not be concerned about whether the backend is MySQL or TiDB. 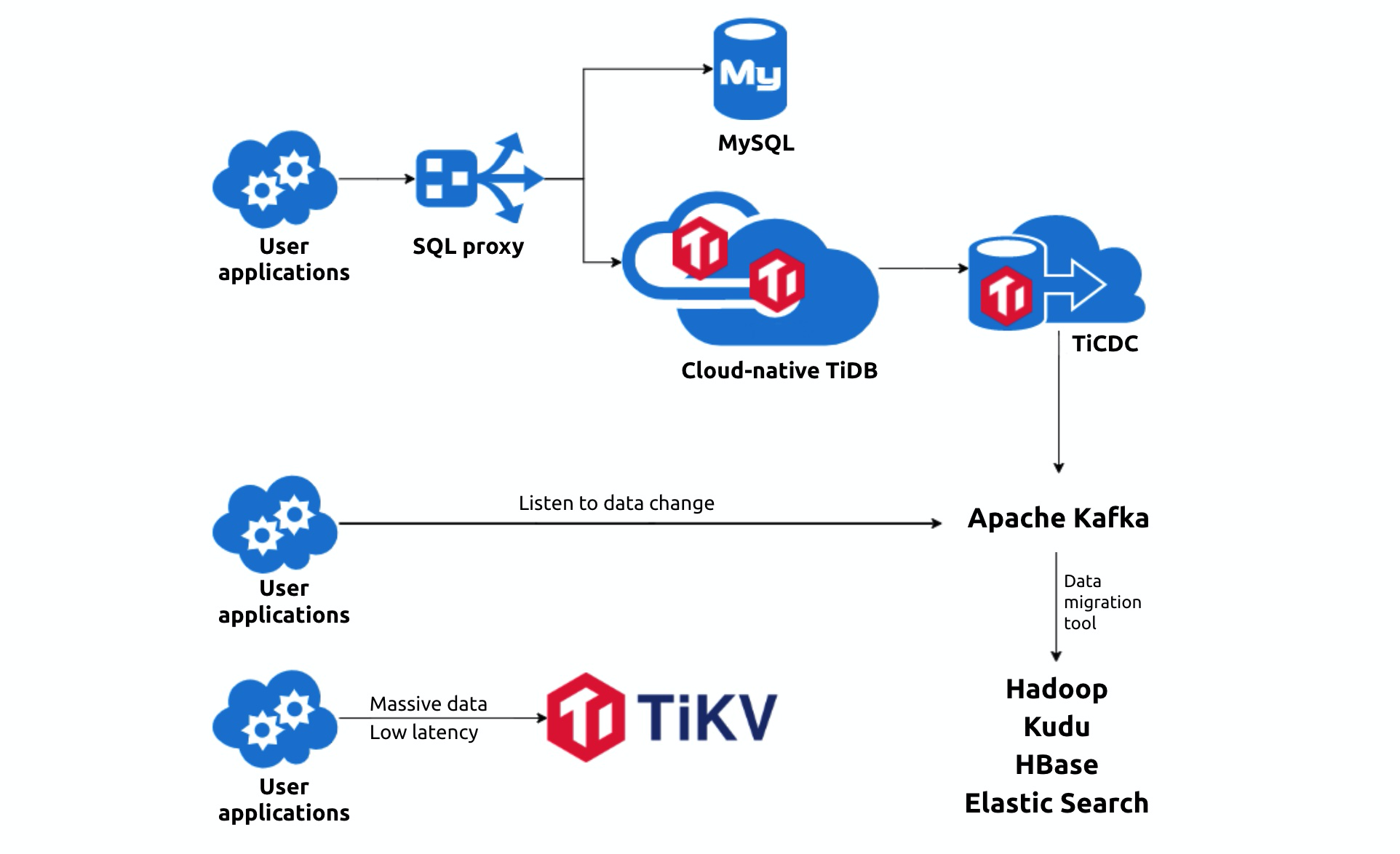 Our future plans with TiDB

The above plans won't be brought to reality if it hadn't been for TiDB. With TiDB as one of the core components in our architecture, we will build a powerful system to support our business in the long run.