In Chinese, Meituan means "better buying, better life," and since it was formed in 2015 by the merger of two companies, the platform has facilitated billions of purchases of goods and services with built-in discounts. By gross merchandise volume, Meituan is China's largest group-buying website. Part Groupon, part Yelp, and part Uber Eats, we offer a range of localized services and entertainment, such as food delivery, restaurant reviews, haircuts and manicures, ticket bookings, bike-sharing, and more. In April 2018, we had 290 million monthly active users, and last year we generated more than 5.8 billion transactions with over $51 billion in gross transaction volume. On September 20, 2018, our company debuted on the Hong Kong stock exchange at an IPO price of HK$69 per share.

As our business has grown rapidly, our data volume has also surged. This has placed tremendous pressure on the MySQL database system in our backend. Burdened by handling this immense data, we began to explore a better data storage solution. Fortunately, we found TiDB, a MySQL-compatible NewSQL hybrid transactional and analytical processing (HTAP) database, built and supported by PingCAP. Now we can harness our data with more confidence than ever before and provide better services for our users to enjoy a better life.

At the beginning of 2018, our DBA team worked together with the architecture storage team to choose and implement a distributed database solution. Since November 2018, 10 TiDB clusters have been deployed in our production environment, with nearly 200 physical nodes. These clusters are deployed for six product divisions or platforms: delivery, transport, quick pass, accommodation, the Meituan platform, and the core development platform. Most of these applications are pure OLTP (online transaction processing) workloads. We are happy to report that all the clusters have been running smoothly since their deployment.

In this post, we will share two of the scenarios for which we chose TiDB, how we are using it, some issues we've had and the corresponding solutions, as well as our experiences collaborating with PingCAP.

The scenario at Meituan with the largest data size for analysis has up to 500GB writes every day. This scenario features:

Previously, we used MySQL for data storage, but we hit capacity and performance bottlenecks—and we expect the data volume of our service to increase ten times in the future. We tested ClickHouse but found that it failed to cope well with high-frequency SQL queries in high concurrency situations, although it satisfied our demands for storage capacity and running low-frequency SQL statements. Besides, we thought that it was kind of an overkill to use ClickHouse only for full low-frequency SQL queries.

In addition to offline services with massive data to analyze and query, we have lots of sharded services. Although there are multiple sharding policies used in the industry to overcome the bottlenecks of standalone machine performance and storage, these policies do have some drawbacks:

Many of the applications and services in our environment were sharded, and some of them would soon exceed the storage capacity of a standalone machine or were in need of a new sharding policy. All of these services embodied the following characteristics:

To overcome these challenges and lay the foundation for the future of our infrastructure, we started to explore a database solution with the following requirements:

Before diving deep into all kinds of database solutions, we did our homework, unraveling the details of suitable data storage structure and transaction algorithm through different papers, especially the following ones from Google:

Naturally, TiDB, an open source, NewSQL, scalable hybrid transactional and analytical processing (HTAP) database built by the PingCAP team and the open source community, caught our eye. It eventually became our database of choice because of its compatibility with MySQL, cutting-edge technical architecture and foresight, and vibrant community. In the nearly three years between the release of TiDB Alpha and the end of July 2018, at least 200 users had deployed TiDB in their production environments. Many of these users are the leading enterprises in their respective industries.

More specifically, compared with traditional solutions in the industry, TiDB is a perfect match for all the above requirements in that it is:

Thus we began to test TiDB for these features.

To evaluate if TiDB's performance and features can meet our requirements, regular functional and performance tests were carried out and compared to those of MySQL. One special test worth mentioning was to validate if each data center has 1 of the 3 replicas so that the crash of one data center will not lead to data loss in the majority of the replicas. We conducted this test against the following standards:

All the test results showed that TiDB totally lived up to our expectations.

Meituan is always cautious about adopting new solutions, and TiDB was no exception. The implementation of TiDB went through the following stages of migration: offline analytical scenarios, non-critical workloads, and then mission-critical workloads.

There are many product lines in Meituan. The services all have huge volumes and demand high-quality performance from the storage system. Therefore, it is important to plan for a good storage system, including the following aspects: monitoring and alert, and service deployment and data synchronization between upstream and downstream.

Integration with the current ecosystem:

Meituan currently uses the Mt-Falcon platform (a customized distributed monitoring system inspired by Open-Falcon) for monitoring and alert. Various plugins have been configured in Mt-Falcon to customize monitoring multiple components, and with Puppet deployed, the privileges of different users and the issue of different files can be recognized. This way, machine installation and privilege control will be established as long as we complete the plugin scripts and the necessary files. 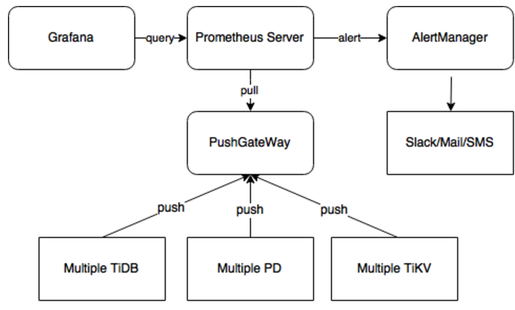 With a set of Prometheus instances deployed in a TiDB cluster, it was inconvenient to gather, analyze, and configure the monitoring metrics in the original TiDB monitoring architecture. Therefore, we decided to converge the monitoring components. As the alert system had been working well on Mt-Falcon, it was unnecessary to build a new one on AlertManager.

To integrate monitoring and alert on Mt-Falcon, we evaluated three policies:

We adopted Policy #3. There is one challenge to this: We need to convert the metric type used in Prometheus to a type that Mt-Falcon can identify. Prometheus supports Counter, Gauge, Histogram, and Summary types of metrics, while Mt-Falcon only supports Counter and Gauge types. The computing expressions of Mt-Falcon are few, so we need to convert the metric types and compute the data in the monitoring script.

During the batch deployment of TiDB using Ansible, we faced a problem: the quickly updated TiDB version brings about frequently updated Ansible, and we only add new code to Ansible instead of modifying the existing code. Consequently, we need to deploy and maintain TiDB clusters of multiple versions online simultaneously. If each cluster has one Ansible directory, it will be a waste of storage space.

To solve this problem, we create an Ansible directory for each cluster version in the center monitoring machine, and each version is maintained using a specific inventory file.

At present, MySQL is used with Hive, and to replace MySQL with TiDB, we need to address two issues:

Synchronization Data from TiDB to Hive

After the service went online, some issues occurred. Here are some typical ones:

In the TiKV bottom layer, two RocksDB instances are used as the storage engines. The new data is written into L0 (Level 0), and when the data in L0 reaches a specific size, the Write operation slows down and even stalls for self-protection.

The default configuration in TiKV:

We once ran into the Write stall problem, and found that the causes for too many files in L0 might be:

We resolved the Write stall issue using the following measures:

Currently, TiDB's GC (Garbage Collection) performs operations on each kv-instance in the single-thread framework. When too much data is deleted by a transaction, GC slows down and takes even more time than the Write operation.

For the time being, this problem can be solved by adding more TiKV instances. In the long run, GC needs to be able to work in a multi-threaded way. PingCAP has implemented this feature in TiDB 2.1.

Issue #3: Response Time of the Insert Statement Gets Longer

At the beginning, the response time of the Insert statement for H80 was about 20ms. As the service continued to run, the response time gradually increased to more than 200ms. We troubleshot this problem and found its cause: as the number of Regions rises quickly, Raftstore has more work to do. Because Raftstore is single-threaded, and each Region sent a heartbeat regularly, the performance deteriorated.

The solutions for this issue are as follows:

In the more than half a year that we have deployed TiDB in the production environment, our confidence in TiDB and PingCAP has grown, and we truly believe that TiDB is a database with great promise.

What's more, the PingCAP engineers and support team are very professional, dedicated, and highly motivated! They respond to our issues quickly and efficiently.

We plan to deploy TiDB in more and more application systems and grow together with TiDB. At present, three DBAs from Meituan and several storage experts are fully committed to collaborating with PingCAP on the underlying storage, computing mechanism in the middle layer, access to the service layer, data model selection of the storage plans, and so on.

In the long term, we will build a mightier ecosystem together with PingCAP. Here are some of our initiatives:

We look forward to a new era of HTAP database led by TiDB and PingCAP!