JD Cloud is a smart technology provider under JD Group and is built upon JD Group's business expertise and technological accumulations in areas such as artificial intelligence, big data, cloud computing and the internet of things. It has established a technology ecosystem that delivers unmatched customer value through comprehensive services spanning from foundational platform building to business consultation and planning, business platform construction and operations and maintenance, and is driven by industry leading products that enable smart and digital enterprises and governments through solutions across a wide variety of scenarios.

Our Object Storage Service (OSS) provides cloud storage services of high availability, low cost, and strong security for enterprises and individual developers. Previously, we used MySQL to store OSS metadata. But as the metadata grew rapidly, standalone MySQL couldn't meet our storage requirements. In the future, we expect to hit 100 billion or even 1 trillion rows. We faced severe challenges in storing unprecedented amounts of data that kept soaring.

In this post, I'll deep dive into how TiKV, an open-source distributed transactional key-value database, empowered us to manage huge amounts of OSS metadata with a simple and horizontally scalable architecture. I'll introduce why we chose TiKV, how we're using it, and some thoughts about future plans.

In this section, I'll elaborate on challenges we encountered in storing OSS metadata and our exploration to redesign the metadata storage system.

As shown in the figure below, we previously used MySQL to store OSS metadata (such as image size). Metadata was grouped in buckets, which are similar to namespaces.

Many similar systems use such a design. But facing business growth with metadata booming, we were plagued by the following challenges:

To conquer the difficulties mentioned above, we redesigned our metadata storage system as shown in the following figure:

The core technique of this solution was making the most data static, because static data was easy to store, migrate, and split. Every day, we made the data written on the previous day static, and merged the static data into the historical data.

However, as the following diagram reveals, this solution had two problems:

Complexity of the metadata storage system

Therefore, we began to look for a new solution: a globally ordered key-value store with great storage capacity and elastic scalability. Finally, we found TiKV, and it turns out it's a perfect match for storing enormous amounts of data.

As an incubating project of Cloud Native Computing Foundation (CNCF), TiKV is intended to fill the role of a unifying distributed storage layer. TiKV excels at working with large amounts of data by supporting petabyte-scale deployments spanning trillions of rows.

TiKV complements other CNCF project technologies like etcd, which is useful for low-volume metadata storage, and you can extend it by using stateless query layers that speak other protocols.

The overall architecture of TiKV is illustrated in the figure below: 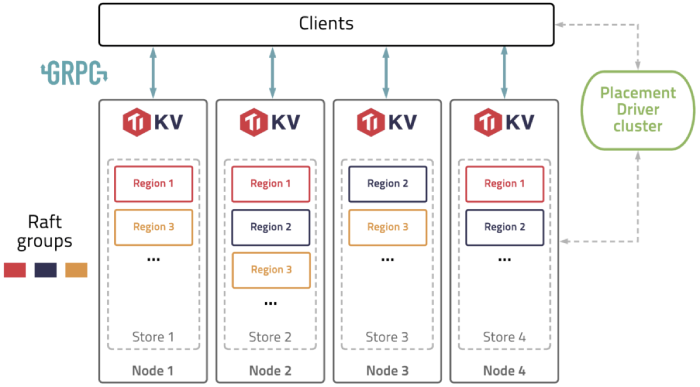 TiKV connect to clients. To understand how TiKV works, you need to understand some basic terms:

TiKV has the following features:

Why we chose TiKV

After we investigated many database products, we chose TiKV because it has the following advantages:

Besides the advantages above, TiKV also passed our tests, including:

The test results showed that TiKV met our requirements for system performance and security. Then, we applied TiKV in our OSS metadata storage system, as shown in the following figure:

Migrating data from MySQL to TiKV

This section covers how we migrated data from MySQL to TiKV, including our migration policy, the traffic switch process, and how we verified data.

The key points of this policy are as follows:

1. Switched the existing traffic to TiKV, and verified reads.

To switch existing traffic, we made the existing data static to simplify data migration, data comparison, and rollback processes.

2. Switched the incremental traffic to TiKV, and verified reads and writes.

To switch incremental traffic, we performed doublewrites of incremental data to TiKV and MySQL. When an abnormality occurred, we rolled back our application to MySQL. This would not affect the online application.

TiKV exhibited outstanding results in the test environment. Therefore, we used TiKV as the primary database during the doublewrite process.

However, in this case, we might run across a problem: writing data to TiKV succeeded, but writing to MySQL failed. The two writes were executed in different transactions, so they were not necessarily both successful or unsuccessful, especially when reads and writes were frequent. Under this circumstance, we would check the operational records of the application layer to determine whether the issue was caused by TiKV or the application layer.

Currently, TiKV serves as the primary database for our OSS metadata storage application. We plan to take MySQL offline at the end of 2019.

The current application status is as follows:

We are now testing TiKV 3.0, and expect to deploy it to the production environment in the fourth quarter of 2019.

Thanks to the horizontal scalability of TiKV, we can deal with an enormous amount of OSS metadata in a storage architecture that is simpler than before.

In the future, we'll optimize TiKV in the following ways: