TiKV is a distributed key-value database. It has higher performance requirements than a regular application, so tracing tools must have minimal impact. This article describes how we achieved tracing all requests' time consumption in TiKV with less than 5% performance impact.

Logs, metrics, and traces are the three pillars of system observability. The following figure shows their relationship:

TiKV has a complete log and metric system, but lacks traces. Therefore, when we troubleshoot TiKV and TiKV's SQL layer, TiDB, we may encounter these issues:

Tracing solves the two problems. Now, I'll share in detail how we implemented high-performance tracing in TiKV. It is still an experimental feature in TiKV, and, to open it, you need a specific code branch. If you're interested, follow Introduce tracing framework (#8981) on GitHub.

Tracing shows the execution path of a request in the system. For example, the following figure is a trace of an SQL statement's execution process from TiDB to TiKV:

From this figure, we can learn the following information about the INSERT INTO t VALUES (1), (2), (3); statement:

In the figure, a box represents an event called a "span." Each span contains:

Spans are hierarchical, forming a parent-child relationship or a sequence relationship, as shown in the figure below:

In this article, unless otherwise specified, we used the following test platform:

TiKV is written in Rust. The Rust community has several off-the-shelf tracing libraries, for example, tokio-tracing, rustracing, and open-telemetry. They all follow the OpenTracing specification, but their performance is not ideal. We discovered that TiKV's performance can be reduced by more than 50% when introducing these libraries.

TiKV's tracing implementation impacts performance by less than 5% by tracing and collecting spans efficiently, which only takes 20 ns.

Now let's see how it works.

Generally, to measure time for tracing, the measurement must ensure:

If you need efficient time measurement, coarse time is usually a good choice. Coarse time can be obtained by passing CLOCK_MONOTONIC_COARSE to the clock_gettime system call in Linux. The Rust community provides the coarsetime crate to read coarse time easily:

Coarse time is so fast that it takes only 10 ns to obtain two timestamps. Its precision is low though, depending on Linux's configuration. The default precision is 4 ms.

In most cases, coarse time can be the first choice, as:

However, in TiKV's tracing scenarios, low-precision time measurement can lead to confusing results as shown below:

To support tracing at microseconds or even nanoseconds precision while keeping performance, we use Time Stamp Counter (TSC).

The TSC register has existed in modern x86 architecture CPUs since the Pentium processor introduced in 2003. It records the number of CPU clock cycles since reset. When the CPU clock rate is constant, it can be used for high-precision timing.

The TSC meets the requirements of monotonic increase, high precision, and high performance at the same time. In our test environment, it only takes 15 ns to fetch TSC twice.

The TSC register cannot be used directly. When it's used as a time source, it has several problems that affect the accuracy, as listed below.

In addition, some CPUs do not increase the TSC in sleep mode:

Some modern x86 architecture CPUs provide features to ensure the TSC increments at a constant rate. In Linux, you can use CPU flags in /proc/cpuinfo to check whether the TSC increment rate is constant:

Even if TSC is constant, it cannot be used to measure time. In the x86 architecture, TSC registers are not guaranteed to be synchronized among all CPU cores. The following figure shows the measured TSC on a laptop produced in 2020 equipped with the latest x64 CPU at that time. As we can see, among the 16 cores, CPU 0's TSC value has an offset.

Recall that in tracing, each span needs two timestamps, representing the start and end of the event. Due to the thread scheduling, the reads of the two timestamps may happen on different CPU cores. As a result, the delta of the two TSC values can produce incorrect elapsed time when the TSC is not synchronized between cores.

An example of TSC value calculation for multiple cores

In the example above, the elapsed TSC (tsc2 - tsc1) is even negative!

To solve this problem, TiKV synchronizes the TSC value of each core by calculating TSC offsets:

When the TSC offset is calculated, the process of obtaining the TSC values must not be on the same core. In Linux, you can use sched_setaffinity to set the thread's affinity to make the thread run on a certain core:

Now, we know the TSC offset of each CPU core. Next, we need to find out which CPU core we're working on. This can be known by using the RDTSCP command, which helps us atomically get the TSC value and CPU ID at the same time.

The Rust code is as follows:

The high-precision and efficient time measurement solution described above has been extracted into a Rust library named minstant, which can be reused for similar requirements.

Spans may be generated on each thread and finally be collected and aggregated into a trace. Therefore, we need a cross-thread span collection mechanism. Span collection is a common performance bottleneck of tracing libraries.

Among these methods, crossbeam::channel is the best choice. It takes about 40 ns to send and collect a span. This is not the end. To improve performance, TiKV uses a different method than the above three to collect spans:

Because LocalSpan, LocalSpanLine, and LocalCollector are all thread-local, they don't introduce contentions and don't harm caches. As a result, the performance is extremely high: it only takes 4 ns to push a span into a local vector, as simple as a Vec::push.

In addition, when constructing the span hierarchy, thread-local variables can be used to implement the implicit context mechanism: users don't need to modify the function signature to pass the tracing context, which greatly reduces the intrusion of existing code.

Now, let's take a closer look at the implementation details of LocalSpan creation and collection.

LocalSpanLine maintains a container, SpanQueue, to load the ongoing or completed LocalSpans. "Ongoing" means that the start time of the event indicated by LocalSpan is known, but the end time is not. The LocalSpans are stored in the Vec structure inside SpanQueue.

To construct the parent-child dependency between LocalSpans implicitly, the context passing relies on the next_parent_id variable that is maintained by SpanQueue.

Next, we will use some examples to describe the process in detail.

SpanQueue's initial state is empty, and next_parent_id is root. When foo occurs at 09:00, SpanQueue performs the following:

At the end of foo (at 09:03), the user submits the index and informs SpanQueue that the event is over. SpanQueue starts backfilling. It:

The above example describes a single event's recording process. It's simple and effective. In fact, recording multiple events is only a repetition of the above process. For example, in the following process, the foo event contains two sub-events: bar and baz.

When bar is over, it updates bar's end time and the next_parent_id variable based on the backfilling steps mentioned above:

Finally, by repeating the above steps, SpanQueue records the information of these three events in an efficient way:

We can connect these records in series to form the following trace tree structure:

For these problems, TiKV retains the thread-safe span recording method described at the beginning of the article: crossbeam::channel collects a single span at a time. This is called a NormalSpan.

From an implementation point of view, NormalSpan information is not recorded in the thread-local container, but is maintained by the corresponding variables to facilitate cross-thread movement. The parent-child relationship between NormalSpans is no longer implicitly constructed by the thread local. You need to specify it manually.

However, NormalSpan and LocalSpan are not completely isolated. TiKV connects them through the following interactive methods. A set of LocalSpans collected from LocalCollector can be mounted on NormalSpan as a subtree, as shown in the following figure. The number of mounts is unlimited. By allowing many-to-many mounting methods, TiKV supports tracing batch scenarios to a certain extent. Most tracing libraries in the community do not offer this. 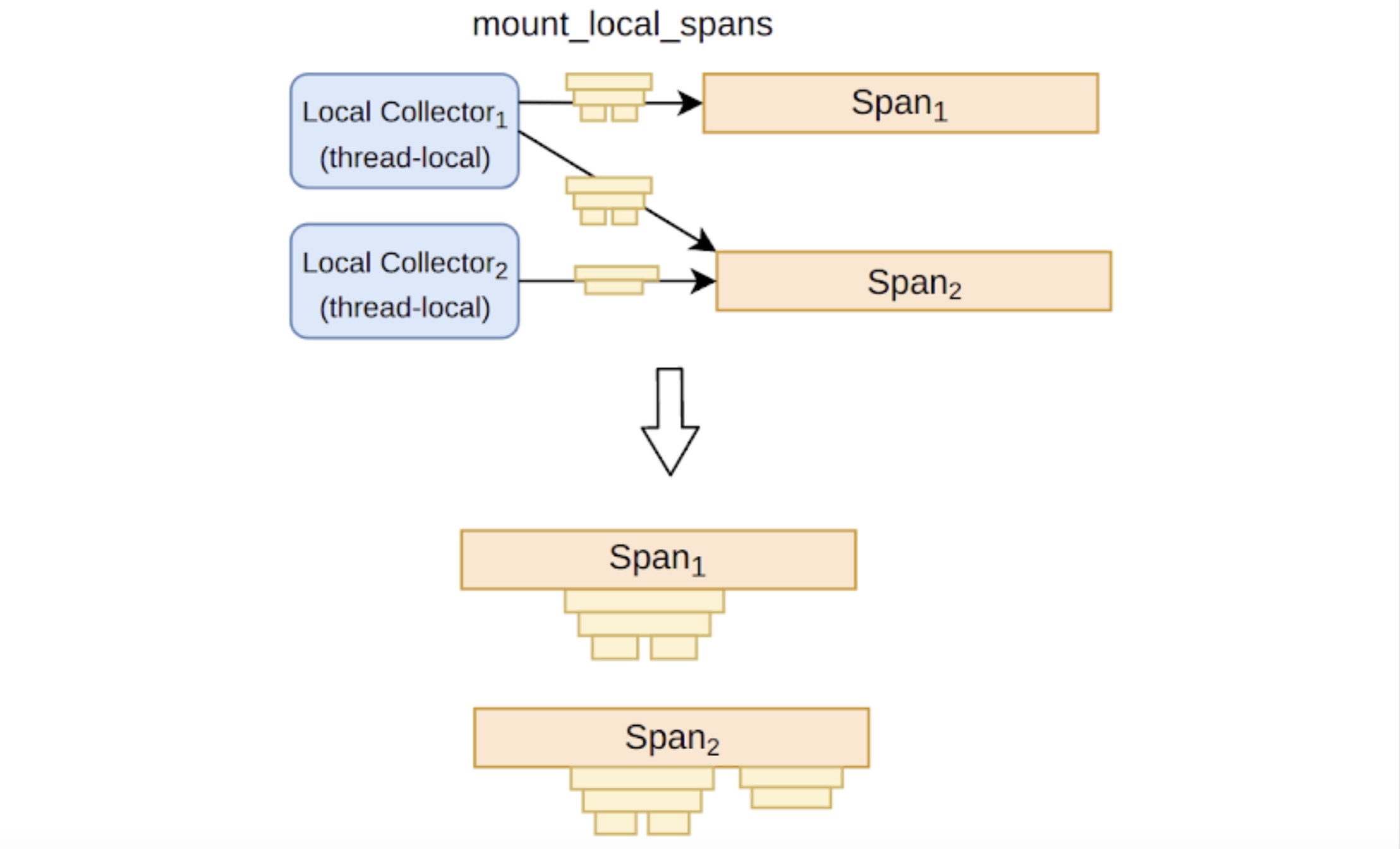 The above implementation forms the fast and slow paths of span collection. They work together to complete the recording of a request's execution path information:

How to use the high-performance tracing library

We extracted TiKV's high-performance tracing logic into an independent library minitrace-rust. To use it, the general steps are:

Create and collect a root span

Usually, we can create a root span at the beginning of a request:

By using the "guard," the span can be ended automatically when the scope exits. In addition to returning the root span, Span::root(event) also returns a collector. The collector has a one-to-one correspondence with the root span. When the request is completed, we can call the collector's collect method to collect all spans generated on the execution path.

We recommend that you use the trace and the trace_async macro provided by minitrace-rust for function-level event recording. This method records the following execution information for a single function:

The following example traces two synchronous functions, foo and bar, by adding trace(event) as the attribute of these two functions. We can record the function's execution information:

To record asynchronous functions, the steps are slightly different:

The following figure shows the result of the trace:

TiKV is a distributed key-value database. Adding an observation feature to TiKV can be difficult, because it has higher performance requirements than an ordinary application. In addition to tracing, TiKV and its upper SQL database TiDB also have other challenging observational requirements. PingCAP's Insight team focuses on solving such observation problems and implementing features. If you're interested, join the Slack channel #sig-diagnosis for discussions!