Async Commit, the Accelerator for Transaction Commit in TiDB 5.0

As TiDB's developers, we have been working on implementing low-latency distributed transactions. Recently, TiDB 5.0 takes a big step to greatly reduce the latency of transaction commits—introducing the Async Commit feature.

The following diagram shows the commit process in TiDB before Async Commit is introduced. 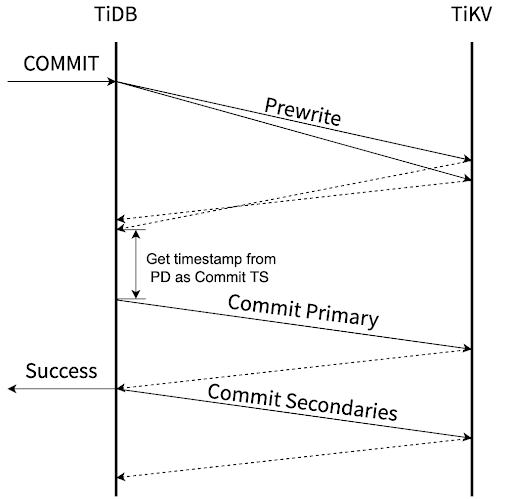 The commit process before Async Commit is introduced

After the user sends a COMMIT statement to TiDB, TiDB has to go through at least the following steps before returning the commit result to the user:

The critical path for the entire commit process includes at least two round trips between TiDB and TiKV. Only secondary keys are committed asynchronously in the background.

However, this also means that there is room for improvement in TiDB's original transaction model. Can the Percolator transaction model be improved so that the state of a transaction can be determined without additional remote procedure calls (RPCs) after the first phase is completed?

The following diagram shows the commit process of an Async Commit transaction. You can see that the original part of getting the Commit TS is missing. Instead, TiDB gets a timestamp from PD as the Min Commit TS before the prewrites. The reasons for the change will be explained in the following sections. 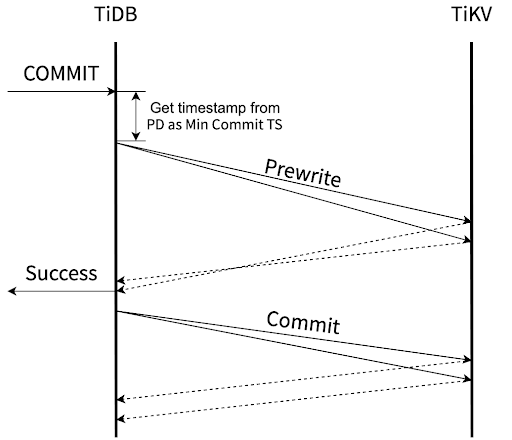 The commit process of an Async Commit transaction

To reach the goal of advancing the time when the transaction state is determined, there are two main issues that need to be addressed:

How to find all the transaction keys

The secondary keys store pointers to the primary key

The primary key stores pointers to the secondary keys

The primary key actually stores a list of all secondary keys. Obviously, if a transaction contains a large number of keys, we cannot store them all on the primary key. So an Async Commit transaction cannot be too large. Currently, we only use Async Commit for transactions that contain up to 256 keys, and the total size of all keys must be no more than 4,096 bytes.

What's more, committing a large transaction takes a long time, so the latency improvement from reducing one round trip between TiDB and TiKV is not significant. Therefore, we also do not consider using a multi-level structure to support Async Commit for larger transactions.

How to determine the Commit TS of a transaction

The following two sections describe how Min Commit TSs are calculated and how they guarantee snapshot isolation and linearizability for Async Commit transactions.

As mentioned in the snapshot isolation section, one possible value for Min Commit TS is Max TS + 1. The timestamps used to update Max TS are from the TSO, so Max TS + 1 is definitely less than or equal to the minimum unallocated timestamp on the TSO. Thus, the requirement of "real-time" is satisfied.

Sequential consistency means that the logical order of transactions does not violate the physical order of precedence. For example, let's assume that there are two transactions, T1 and T2. If T1 is committed before T2, T1's Commit TS should be smaller than or equal to that of T2.3

To guarantee sequential consistency, TiDB gets a timestamp from TSO on PD as the minimum constraint of Min Commit TS before the prewriting process. Because the real-time property is guaranteed, the timestamp obtained by T2 before the prewriting process must be greater than or equal to the Commit TS of T1. Therefore, we can guarantee that no causal reverse happens, and sequential consistency is guaranteed.

If a transaction only updates a non-index column of a record, or inserts a record without a secondary index, it only involves a single Region. In this scenario, is it possible to complete the transaction commit in only one phase without using the distributed transaction protocol? Well, this is certainly possible, but the difficulty lies in how to determine the Commit TS for a one-phase commit transaction.

One-phase commits do not use the distributed commit protocol, which reduces the number of TiKV write operations. So if a transaction4 involves only one Region, using one-phase commit not only reduces transaction latency, but also improves data throughput.

As mentioned above, getting the Min Commit TS from the TSO ensures sequential consistency. So what happens if this step is eliminated? Would it save another round trip latency between PD and TiDB?

Also, if you omit the operation of getting the Min Commit TS before the prewriting process, the Commit TS of T1 may be 2, which is smaller than the Commit TS of T2. If there is a transaction T3 with a Start TS of 3 at the same time, you can observe the fact that T2 is logically later than T1 by reading key x and key y in T3. Therefore, there is no linearizability in this example.

If TiDB does not get the Min Commit TS from the TSO, the concept of a snapshot may be quite different from what is expected. In the following example, T2, which starts later than T1, notifies T1 to commit, and T1's Commit TS may be smaller than T2's Start TS.

For users, T2 reading the T1's changes to x is not expected. In this scenario, the property of repeatable readability is not violated, but it is debatable whether the requirement of snapshot isolation is still met 5.

We refer to such weaker consistency as causal consistency: the order of causally-related transactions is the same as the order in which they physically commit, but the commit order between transactions that are not causally related is uncertain. Two transactions are causally related only when the data they lock or write to intersects. Causality here only includes causality that can be known by the database—not external causality such as the "side-channel notifications" in the example above.

As it is not very usual for such a special scenario to occur, we still offer users a way to skip getting the Min Commit TS. Transactions opened with START TRANSACTION WITH CAUSAL CONSISTENCY ONLY do not get the Min Commit TS when committing. If your scenario does not involve controlling the commit order of two concurrent transactions outside the database, you can try to lower the consistency level to save one operation of TiDB getting the timestamp from the PD TSO, and thus reduce the time.

In the sysbench oltp_update_index scenario, a transaction only writes two keys, row record, and index. It is also an auto-commit transaction with no additional interaction, so theoretically Async Commit can significantly reduce its latency.

As for transactions that involve only one Region, the optimization of one-phase commit can reduce the latency of the transaction commit even more significantly. It can also improve the data throughput because it reduces the amount of writes to TiKV. 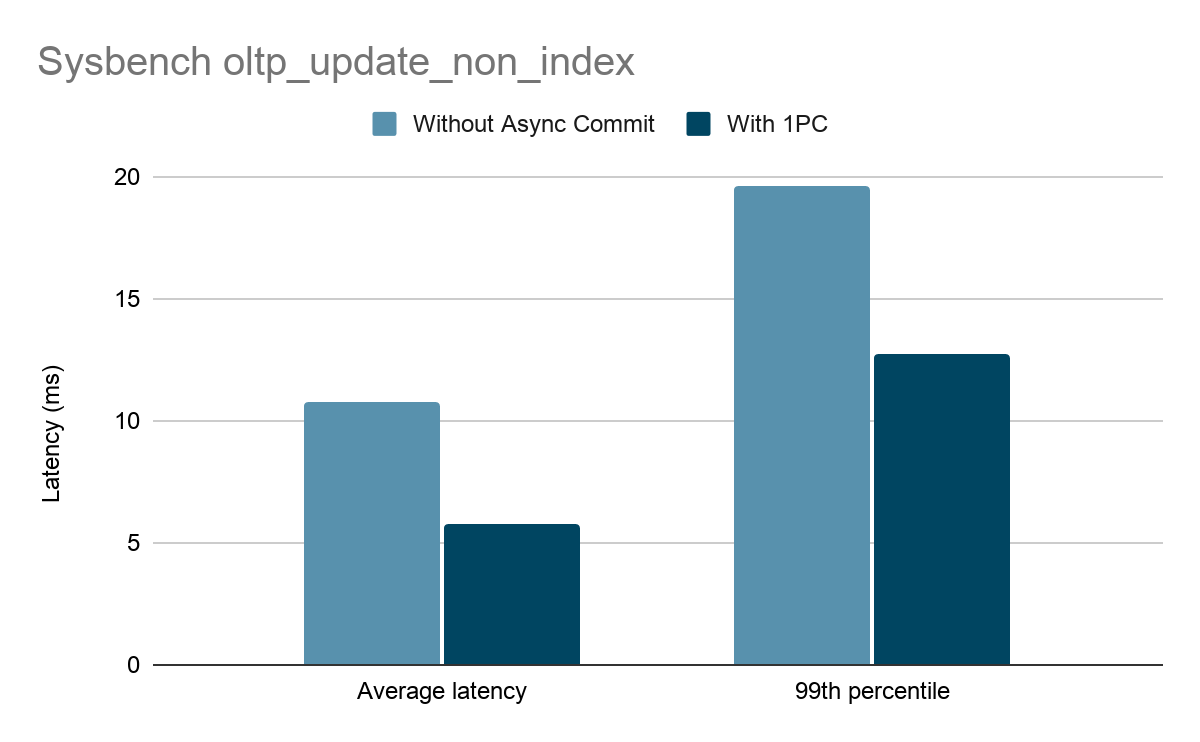 Conversely, there are some scenarios where Async Commit does not significantly improve performance:

Async Commit reduces the latency of a single write to TiKV for TiDB transaction commits, which is a major improvement over the original Percolator transaction model. Newly-created TiDB 5.0 clusters have Async Commit and one-phase commit enabled by default. Upgrading to a 5.0 cluster from an older version requires the user to manually enable the Async Commit and one-phase commit features: set the global system variables tidb_enable_async_commit and tidb_enable_1pc to ON.

If you'd like to learn more about the Async Commit design, you can read the design document. In the future, we will continue to improve the performance of TiDB transactions and improve your TiDB experience so that more people can benefit from TiDB.

If you are interested in discussing and planning the future development of TiKV distributed transactions, you're welcome to join the Transaction SIG and find us in the TiKV Community Slack space.